I've been gradually enabling ECMP (Equal-Cost MultiPath) routing on parts of the University network as part of a prelude to the new data centre network and to improve performance generally (by making use of the dual downstream interfaces into institutions).

For the most part, this is fairly straightforward and just worked - I'll explain what was needed in each case in a future post (as MPLS VPN works slightly differently and needs some special consideration), but I did get a nasty problem which broke DHCP relaying in some places that I'll cover here.


First, let's review how DHCP relaying works (what you get when you do ip helper-address ... on a Cisco router interface towards clients).  Consider the following network: 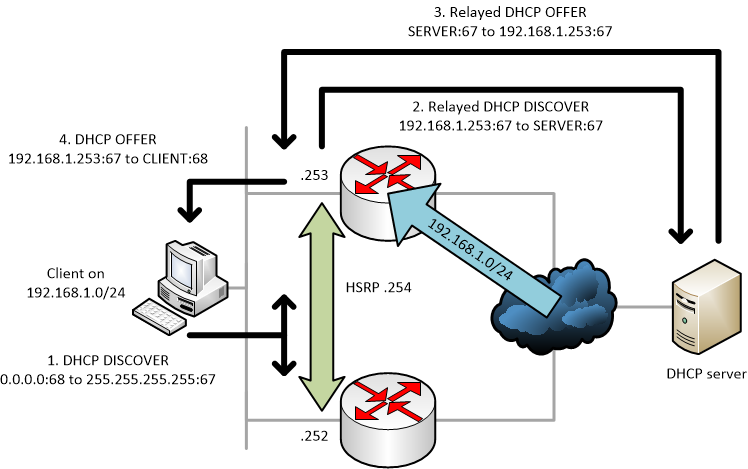 When a client on the subnet 192.168.1.0/24 wants to DHCP, the following happens initially:
This all works fine and, assuming the client wants to take the address, it will send a DHCP REQUEST (using the same process) and receive a DHCP ACK back from the server so it can begin using the address.


Now consider what happens when the same DHCP DISCOVER is relayed by the other client subnet router, without ECMP: 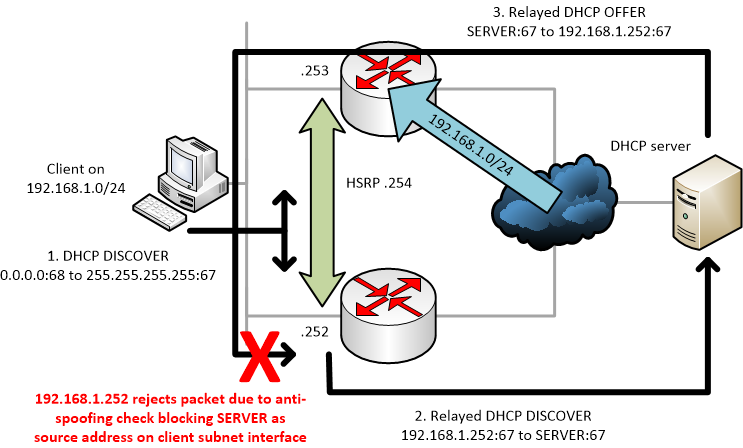 Here, something goes wrong at step 3, trying to return the DHCP OFFER to the relaying router:
With this configuration, typical for a network with a FHRP (First Hop Redundancy Protocol) such as HSRP or VRRP is in use, half of the DHCP replies (the ones relayed via one of the two routers) will be lost when they're returned to the relaying routers.

However, this in itself isn't particularly a problem in that both routers will relay the same packet to the DHCP server, resulting it receiving two copies of each DISCOVER [but with different relay agent / forwarder addresses], causing two OFFERs to be returned; the clients will not miss out as they'll get one of the two copies.  This is why I've never noticed this problem, even though it's been going on for years: the clients have still got their address and worked.

(Actually, I was sort-of aware of this problem, as it prevented pinging one of the routers' own addresses on a particular interface, if the source of the ping was elsewhere on the network.  However, that's just been a minor inconvenience and not service-affecting; I never realised that would also be affecting DHCP.)


When this situation is combined with ECMP this can get messy: the returned DHCP OFFERs (and ACKs) might be returned to either of the two client subnet routers.  The routers' addresses are often 1 number offset (e.g. 192.168.1.252 vs .253) which will likely mean they each take a different path.

However, if you're really unlucky (and, of course, we were, in some situations), ECMP will return the .253 packet via the .252 router and the .252 packet via .253.  This results in both replies being rejected and the client getting neither of the responses.

Fixing the problem and creating another


I couldn't find any way to direct the replies back to the correct router (e.g. by advertising the router's interface IP address into OSPF as a /32), so dealing with them being rejected by the anti-spoofing protection seemed the only solution.

As I've written, I've been looking at the ip verify unicast source ... command recently, and it seemed a good opportunity to employ that, rather than modify lots of access control lists.  According to Cisco's documentation, that command has a special feature in to handle DHCP:

— from the IOS Security Configuration Guide for IOS 12.2SX

Sounds good, except that doesn't handle the source addresses of relayed DHCP replies.  It would be nice if this included "packets with a source address of the interface ip helper-address and port 67, destined for the router's interface address port 67", but it doesn't.

However, the command has a feature to allow packets matching an access list to be accepted, even if they fail the RPF check.  It's configured as follows:

This will allow the initial DHCP DISCOVER in (as described in the Cisco documentation), regular 192.168.1.0/24 traffic (due to the RPF check) AND traffic from the DHCP server on port 67 to an address on the same subnet port 67 (which is less tedious than putting the interface IP address itself as it can be copied to the other router without modification).  This change can be combined with a simplification of the interface access lists (if used).  So, I implemented a few of these and all looked hunky dory.


However, a little while later, we started getting alarms for CPU usage on the Catalyst 6500-E routers.  A show process cpu sorted command showed high load caused by the IP Input process.

This is usually caused by excessive traffic being forwarded ("punted" in Cisco parlance) to the Route Processor (RP) for handling.  We can capture and display these with the following commands:

(Use debug netdr clear-capture to clear the buffer and our old friend undebug all to switch it off.)

The packets being punted all appeared to be regular data - nothing complicated like DHCP which needs special processing, so I started doing some more reading and found a document on Cisco's website explaining how this configuration is handled on a 6500:


"For unicast RPF check without ACL filtering, the PFC3 provides hardware support for the RPF check of traffic from multiple interfaces.

So it appears that, when you use an ACL, all the traffic not matching the ACL will get punted to the RP.  Excellent.

Fixing the problem for good


So, I backtracked on using the ip verify unicast ... command and reverted to using our old inbound access lists to protect against address spoofing.  These now have an extra entry and look as follows:

This appears to do the trick and doesn't involve the RP on the router going bananas.  Given this problem, I think I'll abandon using the ip verify unicast ... command!